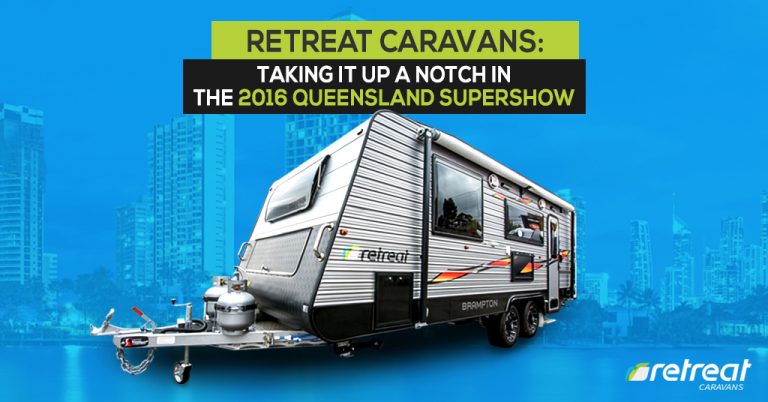 Retreat Caravans: Taking It Up a Notch in The 2016 Queensland Supershow

The 2016 Queensland Caravan, Camping & Touring Supershow was a great event for the Retreat staff, the active and returning Retreaters and of course, the new family members.

One of the biggest caravanning events that kicked off June 8, 2016 at the Brisbane Showgrounds displayed 14 Retreat Caravan models with the Whitsunday and Spinnaker leading the way. The Retreat stand was a show-stopper, as the staff brought forth their A-game to make sure that visitors and spectators alike were given only the best caravan options.

The team, headed by National Sales Manager, Justin Borg, showcased what these action- and feature-packed caravans are capable of up until June 13 – and all the hard work and preparation paid off.

It was indeed a successful 6-day show for Retreat Caravans – thanks to Cath, Tilly, Matthew, Nathan, Jo, Mark, Tony and the rest of the City Caravan Centre Team. The event also highlighted what everyone could expect from Retreat Caravans and its Dealerships – reliable support, efficient customer service, complete and unique caravanning experience courtesy of the best caravans available.

If there’s one thing that the super show proved, it’s that customers still go for the Retreat brand in getting them to their dream adventures. As shown in the number of first time Retreaters and those who chose to upgrade their current Retreat with a new Retreat!