Although Russell and Heather Thom initially thought the phone call telling them of their win was a prank, the stunned couple soon realized that they truly were being honored as the 3,000th customer of Retreat Caravans. 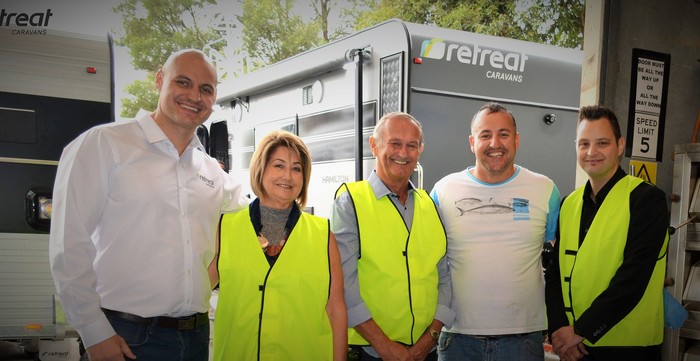 The Thoms were all smiles as Justin Borg, National Sales Manager and Tilly Rexhepi, Executive Assistant for Retreat Caravans rolled up in front of the lucky winners’ Hilton Hotel in an Exquisite stretch limo to transport them to the RC 3000 celebration.

Asked about her thoughts when she answered the phone call announcing their win, Mrs. Thom stated at first she was afraid something was wrong with their caravan, or that she would have to make decisions without the help of her husband, who was not home at the time.

When Heather told her husband about the call, Russell Thom was also unsure if it was all a hoax. It took some persuasion, but eventually both of them were convinced of the sincerity of the call and the RC 3000 celebration in honor of their purchase.

‘Both Russell and I are very outdoorsy,’ Heather stated. ‘We love the outdoors, and we always knew we were going to either get a caravan or a motor home of some sort and go around Australia when we retired. We started our research probably five years ago.

When we came across Retreat Caravans at the caravan show, we bought the Mabel. That was the caravan we wanted.’ 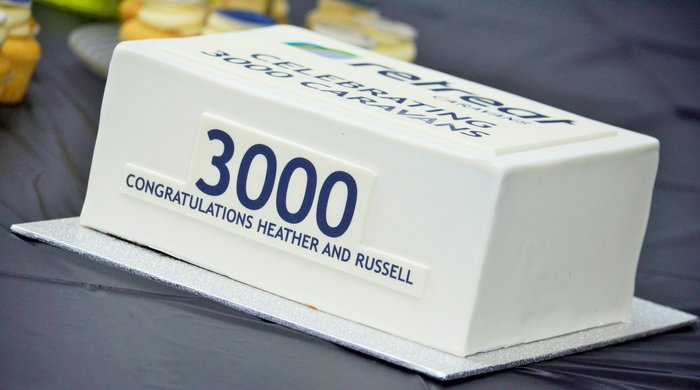 On April 22, the RC 3000 festivities began with a brief history of Retreat Caravans, as the day also marked the celebration of the company’s 10th anniversary.

Starting in 2006, Retreat Caravans began producing just one to three caravans per week, but as Shaz Kaptan, Owner of Retreat Caravans stated, ‘With great people around you, you get to do big things’.

The family-owned company ‘recruited well’ and soon moved to a bigger and better facility, producing 10 plus caravans per week, with over 450 total caravans produced in a year.

The air was charged with expectation at RC 3000 as the Thoms were given a private tour of the manufacturing facility and introduced to the people who built their caravan.

The Mabel looked resplendent, adorned with a huge red bow as it sat awaiting the unveiling.

Mr. Thom became teary-eyed upon viewing the caravan and learning that a few nice surprises awaited them –

Including $1,500.00 worth of vouchers supplied by Retreat Caravans and an 111 Litre Ice Box Supplied by Dometic. 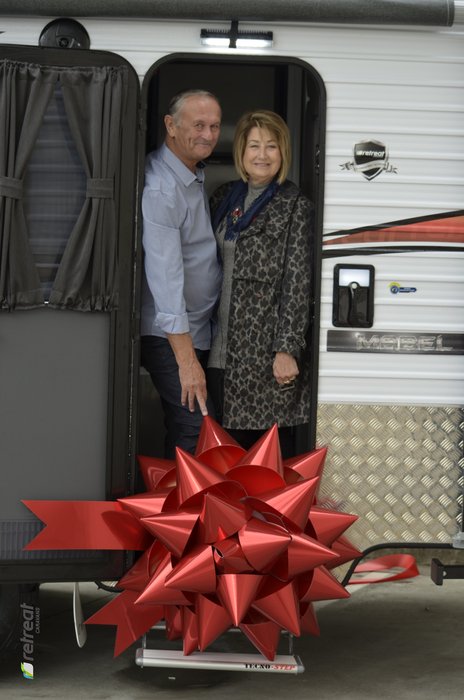 Cheers and applause erupted from the crowd as Heather Thom cut the red ribbon and the Thoms took possession of their caravan.

Once inside, Heather said it was

When asked what sold them on the layout of the Mabel and if they had made any changes, Heather stated ‘We’re sitting in one of the changes,’ referring to the seating area which they had customized by enlarging the space.

Benefits such as the ample storage space and large pantry in the Mabel were exactly what the couple was looking for in the caravan that will enable them to see Australia in a whole new light as they embark on their journey around the country.

Retreat Caravans prides itself on a reputation for exceptional customer service and creating a sense of community among its customers.

Heather Thom said it best when she stated

‘It’s a proud moment for us. We’re part of the Retreat family now.’