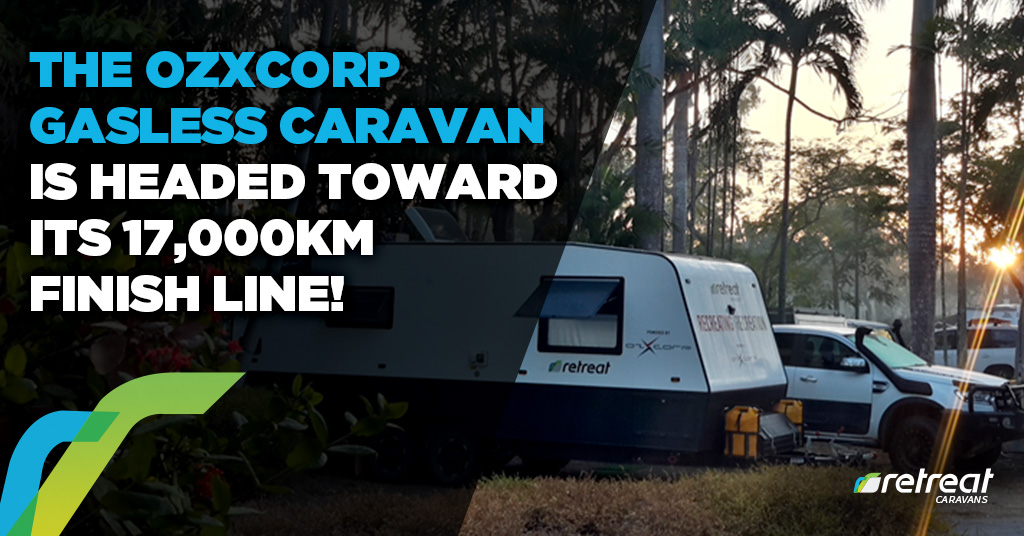 The OzXcorp Gasless Caravan Is Headed Toward Its 17,000km Finish Line!

The epic endurance test of solar, battery and caravan tech is winding through its final weeks, with the end – mid-September 2019 – now in sight!

The crew were rather shocked by the need to resort to the use of the generator in order to boost the battery pack’s charge.

Although temperatures were well up in the mid-30s, sunlight was in short supply thanks to the bumper crop of tourists at the campsite.

Being stuck at a non-powered site, John and Fran opted for the quick fix, using a generator run to boost the batteries to 25 per cent SoC.

This gave them a comfortable margin to reach their next layover at Pussy Cat Flats campground.

The team knew full sun exposure would be available at Pussy Cat Flats.

John pointed out that one of this test journey’s goals was to refrain from using grid power, the generator, or the vehicle’s 12-volt Anderson plug to top up the battery.

The intent was to show that the electric caravan could be operationally independent of any non-solar power sources.

On this day, though, the generator was the best option to meet power needs without sun or vehicle assistance.

He also noted that reductions in power use – such as cutting the air conditioning down to three hours per day – would have slowed the test caravan’s power drain.

However, since the instructions for the test gave them the discretion to manage power usage as they saw fit, John felt the generator was the right solution.

Andrew Huett, OzXcorp director, flew to a rendezvous point with the crew in Darwin to check up on the tech and confirm everything was still operating properly.

This was also a handy opportunity to debrief with John and Fran before their next leg of travel toward Melbourne.

The final destination for the test van is the Retreat Family-Annual Get-together in Geelong, Victoria.

John and Fran are scheduled to arrive on September 15, giving other Retreat caravan owners the chance to see the test caravan up close and personal.

Check back with us for more details as our electric caravan and test crew tackles cloudy weather around Melbourne!

Find out why you should go for our fully-electric Retreat caravan here.