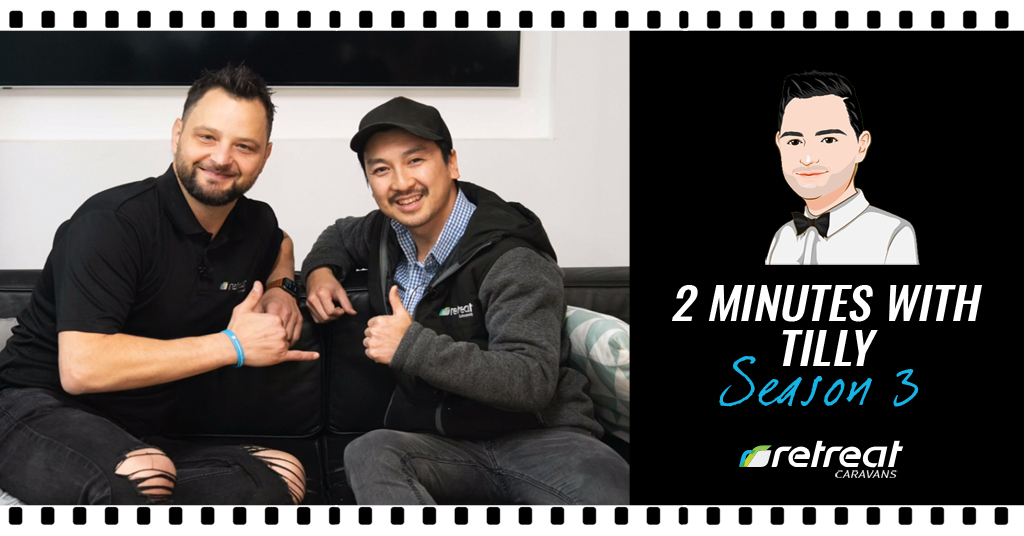 Tilly Rexhepi: Welcome to another episode of 2 Minutes with Tilly. Today I’ve got one of my homeys from Retreat Caravans here, Khoi. Khoi, how are you going, buddy?

Tilly Rexhepi: I’m fantastic. Now, Khoi, can you clarify something for me? How do you spell your name?

Tilly Rexhepi: And how does Retreat Caravans spell your name?

Tilly Rexhepi: So everyone here calls you Koi and emails you Koi, and it’s not actually your name.

Khoi: Unfortunately no, it isn’t.

Tilly Rexhepi: Who came up with that then?

Khoi: Look, I’m not going to drop anyone’s names, but I’ll drop them.

Tilly Rexhepi: On this segment, you can drop it and it can not be used as evidence in the court of law.

Khoi: I think it was a typo and the person that… Look, like I said, I’m not going to drop anyone’s name.

Tilly Rexhepi: It was me.

Khoi: Yeah. So it’s been derived from there ever since.

Tilly Rexhepi: Now Khoi, you’re actually a really intelligent and smart person. I don’t know why you’re here, to be honest with you, but can you actually tell everyone what it is that you do here at Retreat? Your title is the Head of Planning. Sounds really important. Let everyone know what you do here and, I guess, what you’ve brought differently to Retreat Caravans than what we would have done in the past.

Khoi: Obviously I’ve been here with Retreat for a little over a year. My past, I’ve used to work in the caravan industry for over 10 years now. So as I’ve been brought to Retreat, my role is Head of Design and Planning. But officially I’ve actually more involved in more concepts, new builds, prototypes-

Khoi: Customizations, and you name it. Basically just the build from planning, right through to the end of the process. And obviously, I’ve implemented a lot of ideas and restructuring more of the designs and more involved with obviously production heavily. Obviously we’re continuing to evolve as a company as well.

Tilly Rexhepi: So you do all that and all I do is jump in caravans and go and interview people. Far out, you’ve got a good life.

Tilly Rexhepi: All right, Khoi. Now I know you do have a significant other, but you have to answer this question like you were a bachelor. Okay?

Tilly Rexhepi: So Nicole Kidman, Delta Goodrem, Margot Robbie. Marry one, date one, kidnap one. Who and why?

Khoi: Yes. And innocent eyes. One of her hits. But yeah, obviously to date Margot Robbie, and Nicole Kidman, yeah.

Tilly Rexhepi: You mentioned that you were in the caravan industry for 10 years plus. What makes working at Retreat Caravans so special?

Khoi: I believe that it’s the concept and the vision that it’s got. It’s always constantly developing and evolving. Obviously, we’re here to move forward in life, obviously in the future as well. And the bottom line is, Shaz is inspiring and he’s got a lot of visions and ideas, and he’s-

Tilly Rexhepi: He’s a visionary. I’ll attest to that as well.

Khoi: And he’s leading to the right path. So obviously, hence why we’re all here together.

Tilly Rexhepi: Every leader of the army needs some good troops.

Tilly Rexhepi: And Khoi, I can guarantee you, we’ve definitely got a good troop in you.

Tilly Rexhepi: Thank you very much for joining us on 2 Minutes with Tilly.

Tilly Rexhepi: Give us a plug. If people want to find out more about Retreat Caravans, what’s our website?

Tilly Rexhepi: How good’s this? Here’s my apprentice, mate. Khoi, Can we take a selfie?