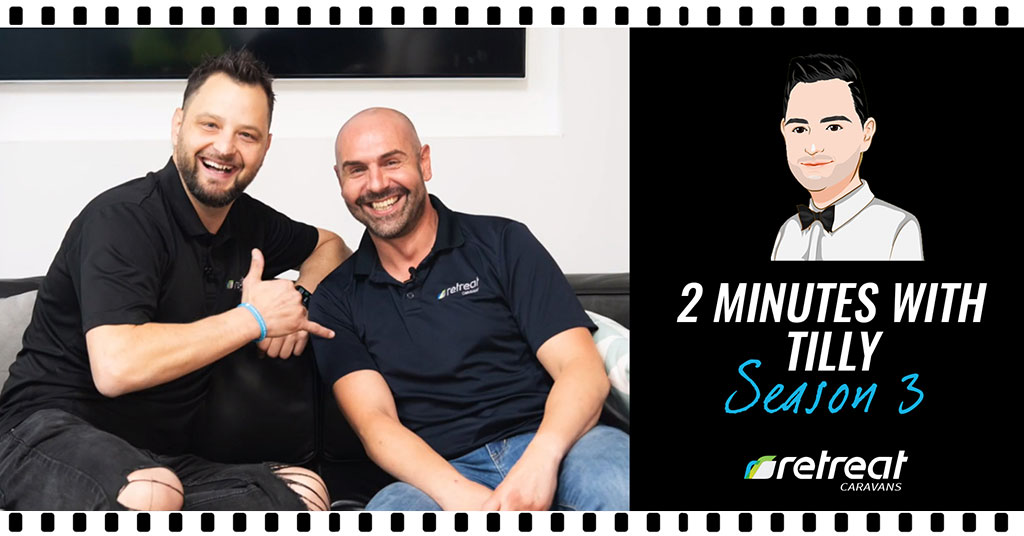 Tilly: Welcome to another episode of Two Minutes With Tilly. Today, I’ve got one of my good friends with me, George Drak-

George Drak: How are you?

George Drak: How are you?

George Drak: Not bad, yourself?

Tilly: Good thank you. Now we’ve done a few interviews of caravans and different types of products that we have, but never have I sat on the couch with you, for Two Minutes With Tilly.

George Drak: Getting down and dirty.

Tilly: Not getting down and dirty mate, but I’m fully excited to be here. Now George, you’ve been in our industry for a couple of years. How have you seen the progression of the industry from when you started to where it is now?

Tilly: Now George. You’ve been heavily involved in the Retreat ERV, and it’s also taken a huge rise in inquiries and in sales and orders. Now, can you tell us or me, in particularly, what do you think that’s had a massive impact in our industry?

George Drak: It gives the consumer more power to their vans.

George Drak: They can run their air cons, their domestic appliances, when they free camper they can lap it up in a bit of luxury. You don’t need to rough it anymore.

George Drak: A hell of a lot of better power-

Tilly: And remind me again, how many Watts on the roof?

Tilly: Can you remind our viewers again? Last time we played, what was the score?

George Drak: I can’t recall Till, I-

Tilly: …is pending, but I’m not seeing any table tennis tables-

George Drak: We’ll bring it down-

George Drak: We’ll bring it down.

Tilly: Just for those watching, George has been promising me a table tennis table, that’s competition quality, for the last three months. All I’ve got is nothing. A hell of a lot of nothing.

Tilly: I’ve been busy. I don’t know what you’ve been doing. Now George, obviously the ERV is your pet project, but you’ve also been promoting the Retreat range. What sort of the feedback that you’re getting about the 2021 Retreat Fraser, Whitsunday, Daydream, of the like?

George Drak: Since we introduced the RXP walls, still a standard across the range, it’s really taken off. The consumers are wanting timberless construction, structural lifetime, free guarantee.

Tilly: From the front, all the way to the back?

George Drak: All the way to the back-

Tilly: It looks pretty sexy. George, I might say-

Tilly: Now George, Daniel LaRusso, Nick Giannopoulos and Borat Sagdiyev. You have to drink with one, kidnap one, and Netflix with one, who would they be?

Tilly: Are you a LaRusso or a Cobra Kai fan?

George Drak: I think now with the second series of Cobra Kai, I think more of a Cobra Kai fan, to be honest.

Tilly: Well Georgie, listen, it’s been a pleasure having you on board. And if anyone wants to find out more about Retreat Caravans or the ERV, where should they go?

George Drak: At retreacaravans.com.au, Till.

Tilly: Fantastic mate. Now just for myself, can we please have a selfie?